Despite 11-month closure, Natural History Museum has been a beehive of activity since March

California Blooming: Wildflowers and Climate Change in the Golden State

Like all of the museums in Balboa Park, the San Diego Natural History Museum has been locked down for most of the past year.

The perpetually swinging Foucault pendulum in the lobby hangs still. Glass cases holding rare and antique books are draped with heavy cloths to protect their sensitive pages from light. And the fourth-floor administrative offices have been empty since the pandemic’s arrival last March. 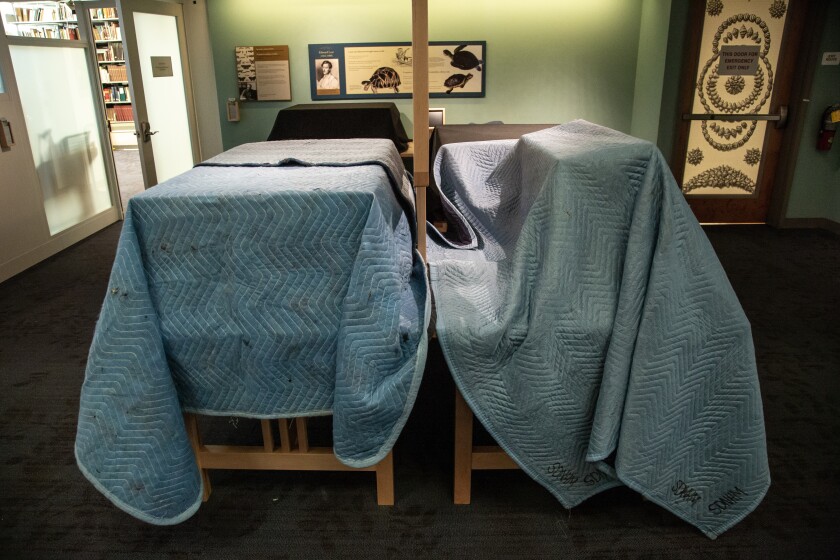 Precious literature is covered by blankets to preserve the pages from damaging light at the Natural History Museum on Monday, Feb. 22. (Jarrod Valliere / The San Diego Union-Tribune)

But a peek through the glass atrium windows into the darkened lobby can be deceiving. Behind the scenes over the past year, the museum’s scientists, staff and volunteers have been as busy as the bees in its Living Lab exhibit.

While the public side of the 150,000-square-foot museum sleeps, the museum’s scientific team has been archiving thousands of insect specimens, conducting fossil research, doing field work and hosting online lessons. The downtime has also allowed the museum to expand its online footprint, revamp its fourth floor to build a new exhibition gallery and examine new ways to open its vast specimen archives to visitors. An empty San Diego Natural History Museum on Monday, Feb. 22, 2021. The museum has been closed to the public since the start of the pandemic and is undertaking a massive renovation of its four-story Balboa Park building. (Jarrod Valliere / The San Diego Union-Tribune)

Museum president and CEO Judy Gradwohl said that she and her roughly 100 full-time employees initially expected the shutdown last spring would only last a few months. But when the true scope of the pandemic became clear last July, officials decided to take advantage of the forced hiatus to spend the rest of 2020 and early 2021 revamping both the building and how the museum at 1788 El Prado connects with the community in the future.

When the museum finally reopens — Gradwohl said the target is early April — it will have a transformed business model. Based on the success of its pandemic-spawned online programs, the museum will carry on this expanded mission even after it returns to full operation. “I issued a manifesto from my home about thinking about how this crisis can help us reframe our model for the museum,"Gradwohl said, in a Zoom meeting with annual members earlier this month. “We’re trying to create a three-legged stool that includes onsite programming but also puts effort into online activities and activities in nature.”

Because many employees have found working from home so positive and productive, many will transition to a hybrid of home and office hours when the museum reopens. With less space needed for staff, five private offices on the fourth floor were demolished for a new 2,000-square-foot walk-through exhibit that will highlight the natural wonders of the Baja California peninsula.

On Monday, Gradwohl gave a private tour of the museum’s upper floors. It was the first time in months that she’d been inside the building, which was dedicated in 1933 and then dramatically reimagined with a 90,000-square-foot expansion in 2001. Although the public areas of the museum are quiet, the specimen and research labs have been staffed. The museum is home to more than 8 million specimens of native local insects, animals, fossils, plants and more. Gradwohl’s favorite specimen is a brown lacewing, a small fly-like insect that was collected by Charles Darwin himself on the island of Tasmania in February 1863. It’s pinned inside a display case with a tiny hand-written card signed “C. Darwin.” 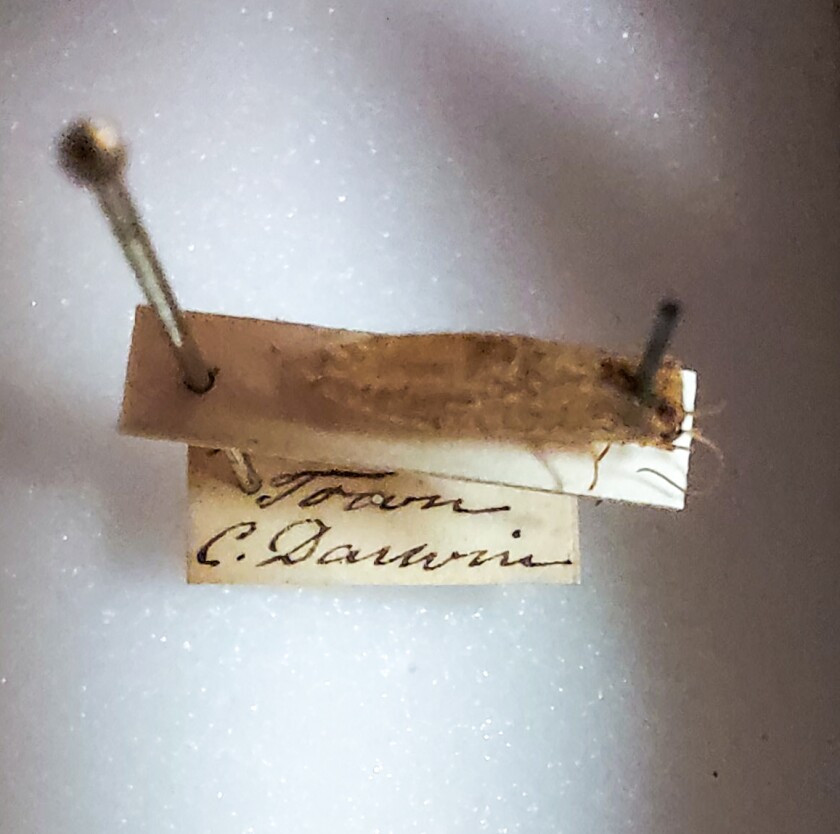 This brown lacewing insect was collected by Charles Darwin in February 1863 in Hobart, Tasmania. The specimen is kept in the archives at The San Diego Natural History Museum. (Jarrod Valliere / The San Diego Union-Tribune)

The lacewing is among more than 1 million insects in the museum’s collection, each pinned and displayed with a tag detailing the date and location where it was found. One of the projects undertaken over the past year has been to begin digitally archiving the museum’s butterfly (Lepidoptera) collection for a developing national database known as LepNet. So far, more than 17,000 museum specimens have been photographed.

On Monday, entomology lab technician Araceli Gomez was working her way through a case of dozens of Sara orangetips, small white California butterflies that hatch each spring. Each butterfly is photographed with its own QR code, which will someday be scannable to include a photo of the butterfly and its collection details. A few doors down, Tom Deméré, the museum’s curator of paleontology, was working Monday on a set of 15- to 18-million-year-old horse and camel fossils unearthed last summer in Otay Mesa during a freeway construction project. Before the pandemic, Deméré had a sizeable team of local volunteers who helped out each day in the fossil preparation lab. But he’s been making do over the past year with just a couple of volunteers due to social distancing restrictions. Deméré said the museum has about 1.5 million fossils in its collection, the vast majority recovered from large construction projects, which are required by state law to have archaeology observers onsite to protect and recover fossil remains.

The fossils in the collection range from ancient camel teeth to whole whale skeletons and dinosaurs. Many are housed in a warehouse in Chula Vista but Deméré said plans are being discussed to possibly move much of that collection to the museum’s basement floor, which has been used in the past as special exhibit space. The goal would be to allow museum visitors a peek inside this fossil collection, much of which has never been seen by the public. 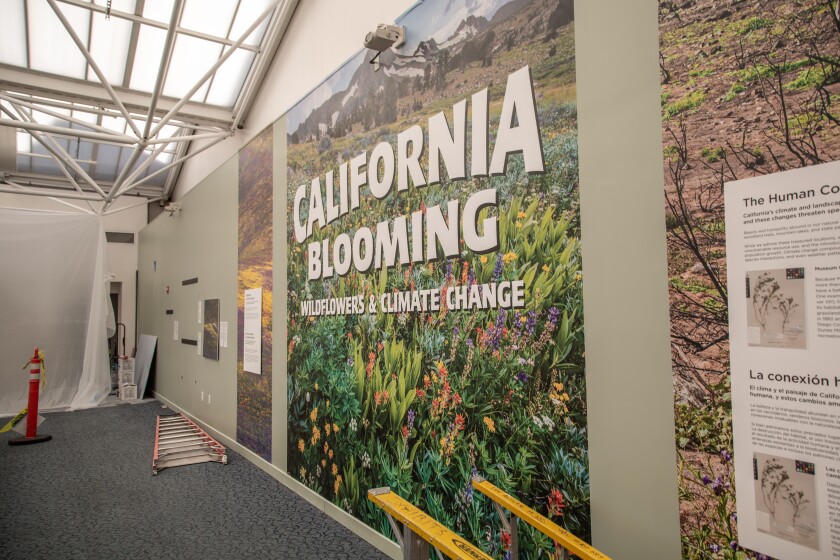 Here are some of the other highlights of work that has been under way since last March at the Natural History Museum: A variety of butterflies from around the world are kept in a display case in the lab at The San Diego Natural History Museum on Monday.(Jarrod Valliere / The San Diego Union-Tribune)